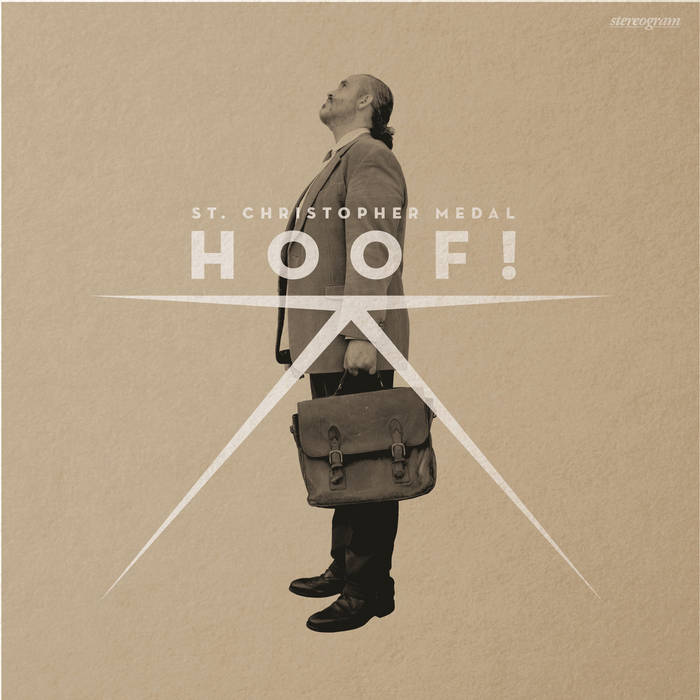 Stereogram Recordings are delighted to announce the release of "Hoof!" the brilliant second album by St. Christopher Medal on June 21st 2019. It will be available on vinyl, CD, download and streaming formats. It was preceded by the video/download/streaming single "Fallen Angel”" on May 31st.

When the Scotpop 4-piece Life With Nixon signed off for good in August of 1998 at Sleazy's in Glasgow, it seemed like the end of something special. Time had run out on Britpop - too many bands, not enough ideas. Getting less young and less stupid, time had also run out on the Nixon's own brand of 'sloppy energy'. They did a lot in 5 years, squeezed a lot of goodwill out of two ep's and a million shows, but even the best bands split up eventually - it happens.

But things don't always stay where they're put. A full 17 years later, Ali and Kenny Mathieson, Billy Nisbet and David Mack, all four Nixons from that night at Sleazy's, released “Sunny Day Machine”, the wonderful debut album by St. Christopher Medal on Stereogram Recordings. Along with newbie Andy Jeffries on piano (Ali's roommate from university in the late '80's!), St Christopher Medal made music that was full to the brim with 17 years of life, love, kids, jobs and the whole history of rock n roll. Ali, who writes the songs and sings them, teaches in a high school in rural Perthshire - Kenny, his brother and ace guitarist, spins vinyl at The Dead Rabbit in Upper Manhattan where he lives. Billy, David and Andy play bass, drums and piano in Perth, Teeside and Dorset respectively. Makes practicing difficult. Gigs are rare and valuable things. You've got to really want to be in a band like St Christopher Medal!

But ‘Sunny Day Machine’ was a record that none of them could have made in their 20's. It’s energy came from long friendship. From deep love of music, from C86 to the classic country rock of The Stones and The Flying Burrito Brothers. None of it dimmed for even a moment. Teenage Fanclub. The Hold Steady. Dylan. The songs were denser, more complete. They're about life - growing up, surviving over time, dreams, children - and they're sad and funny. The record was made in six days of being together (years of gigging paying off in deeply unexpected ways) followed by two years of head-scratching. It was the sound of a band who couldn't stop being a band, even when being in a band makes no practical sense. Sometimes the best things in life make no sense at all. ‘Sunny Day Machine’ was a statement of intent. After 23 years of playing together, St Christopher Medal were finally getting started!

Fast forward to June 2019 and the imminent release of ‘Hoof!’ the brilliant second album by St Christopher Medal. The six-piece send their heartworn, empyrian Country Rock rising into the vast blue skies of Highland Perthshire, where their music was made. Like ‘Joey’ from Dylan’s song, the album was finally ‘finished off’ in Red Hook, Brooklyn. ‘Hoof!’ picks up where 2015’s ‘Sunny Day Machine’ left off. Classic Scottish songwriting (TFC, Lloyd Cole, Trashcan Sinatras) and sweeping alt-americana (GP, Wilco, Okkervil River) filtered through thrilling, melodic guitar and piano - deserts, highways, half-dreamed visions of rock’n’roll heartlands. From the opening cosmic struggles of ‘Fallen Angel’, through classic country rock epics like ‘Wayne, Moon Pilot’ (“sheer class from start to finish” Scots Whay Hae) ‘Hoof!’ moves across a landscape of unfinished moments from rock’s back pages, finding new things to talk about on its way. Songs about real life, about people you know – songs about the world we live in. By the time it arrives at the last song, ‘Hoof!’, the record has swept itself into a crescendo of optimism despite everything.

“Wayne Moon Pilot is sheer class from start to finish” – Scots Whay Hae!
“Other worldly” – Daily Record
“On the form demonstrated by this debut album, St Christopher Medal are a highly melodic and subtly barbed addition to Edinburgh-based label Stereogram’s burgeoning roster of literate pop artists” – **** Is This Music?
“Combining the melodic strengths of Teenage Fanclub with Bruce Springsteens’s heart-on-the-sleeve directness, St. Christopher Medal purvey a Caledonian take on classic Americana” – Sogo Magazine
“The time flies by due to the amazing amount of life and vitality prevalent throughout…wonderfully rousing.” – Pure M Magazine
“A very fine record by a very fine band.” – Penny Black Music
“For those who value intelligent songcraft, ‘Sunny Day Machine’ is a subtle and compelling joy that rewards repeated listening.” – 8/10 Louder Than War
“Yet another gem in the increasingly impressive Stereogram catalogue” – Manic Pop Thrills
“One fascinating and enjoyable proposition” – The Ringmaster Review