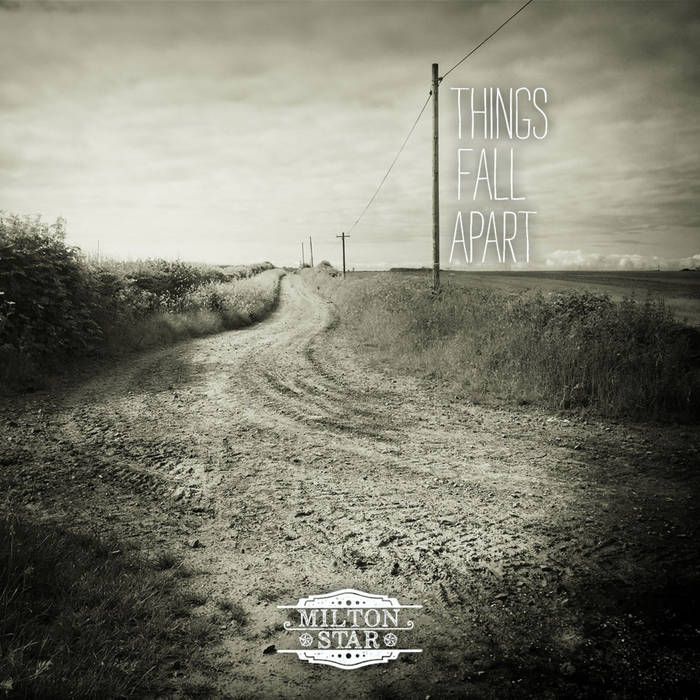 Matt Kassay Brilliant and breathtaking. David Lynch meets a heartbroken Nick Cave on a night flight to Mexico. Love this track so much I paid for it twice and could listen to it endlessly. Favorite track: Things Fall Apart - download single.

Following on from the introduction of Milton Star via the download release of Salvation/Sorryville earlier this year, the creative duo of Alan Wyllie and Graeme Currie now set out their stall with the quite beautiful Things Fall Apart, complete with their usual video interpretation. For those familiar with the simultaneously released debut, Things Fall Apart finds them in similar musical territory, only they have relocated a few hundred miles over the border from the American Deep South to Mexico with a tale of the darker side and inherent fragility of the human condition.

From the opening chords of Things Fall Apart, you are immediately in film territory – with the deep rumbling sounds of Duane Eddy, then reaching out, almost Gospel-like in a Nick Cave fashion to bring the whole thing back to its roots. Whilst Cave has built an impressively successful career through referencing the Southern literary vaults of William Faulkner, Flannery O’Connor and Harry Crews, you can tell Milton Star have dusty volumes of works by Raymond Chandler, Dashiel Hammet and James Ellroy nestling somewhere in their bookshelves.

As expected, a wonderful visual interpretation accompanies this release - a dark celebration of Mexican Day of the Dead, a paean to love and loss, regret and all that goes with it. Think the sadness of Isabelle Allende set against the slightly twisted filmmaking of Alejandro Jodorowski. It’s all in there.

This fascinating use of Mexico in the accompanying video speaks volumes, the opening roll of the dice, the miniature Mariachis, the Mexicano Tarot Cards, the sinister skull-painted faces of the 'Dead ‘revellers, the exotic burlesque dancers – this is a beautifully tragic song with all these associations, visually set against a South American backdrop, one of the most dangerous countries in the world.

Bogota, Caracas, Mexico City, Ciudad Juarez – it could be any one of these cities, where life is truly cheap and Things Really do Fall Apart.

"There is unlikely to be a better single this year." PENNYBLACKMUSIC

"Evokes more emotions in four minutes than most artists manage across a whole album." WHISPERIN’ANDHOLLERIN’.COM

“The effect is simultaneously beautiful and bleak, but it always is evocative and satisfying.” WHEN YOU MOTOR AWAY

“UK duo offers up dark and trembling meditations smeared with the melancholic malaise of experience.” OVERMENTAL.COM

“This is classy stuff with a sense of mischief and the luxurious, almost Elvis-like vocals really hit the spot.” LISTEN WITH MONGER

"On their riveting new single, “Things Fall Apart,” Alan Wyllie and Graeme Currie ride shotgun to a “dark passenger” as the blackness of resignation unfolds." BUCKETFULLOFNAILS.COM

“A soundscape of beauty from north of the border. Utterly divine.” PENISTONE FM